The series of 20 images entirely created between 2010 and 2013 contains the most representative shots of Karim Carella’s photographic journey so far. 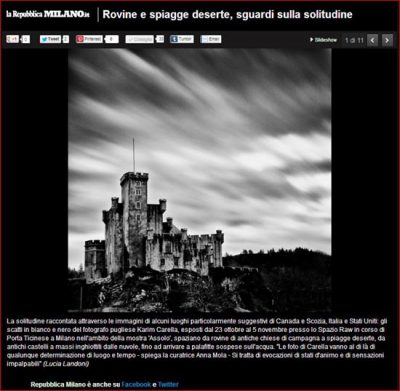 The search for a personal style has led to a formal coherence based on black and white and the square format.

Alongside these, there are elements such as: compositional minimalism, long exposures and accentuated contrasts (one of the aspects on which the author focuses most in post-production; a phase which is, moreover, reduced to the “light room”).

Within these cornerstones the exploration of the photographer moves. Exploration of places: the images were taken in the countryside, mountain peaks, beaches; from Canada, to the United States, to Europe. Then exploration of genres: in fact, these are images ranging from macro, to landscape, up to a more narrative style, in the latter. Finally and above all, exploration within photographic art and its relationship with the author.

On a thematic level, it is possible to trace a development within the sequence of the shots: rocks and highly enlarged details are initially presented that aspire to abstraction, to pure form. We then move on to the figurative, in which objects and landscapes are recognizable, even if not yet determinable. This is the case of deserted beaches, snow-covered villages, disused trebuchets. With the last shots, belonging to a series that is still open, a narrative is sketched: the recognition of real places that recall those of fairy tales, which are part of everyone’s childhood imagination.

The common denominator of these images is undoubtedly the personal and solitary search to express a period of time, a context, fleeting but contemplated, outside of any rational and deterministic chronicle of the event or place.